JOHANNESBURG, June 30 (Reuters) – South Africa’s rand weakened further in early trade on Friday as a breach of key technical levels triggered short selling by offshore investors weary of local politics and betting the U.S. economy is on the mend and set for higher interest rates.

* Better than expected estimates of economic growth in the United States in the previous session chipped away at the rand’s carry trade attraction, with higher yields in U.S. 10 bonds signalling an imminent move away from emerging currencies.

* Possible re-emergence of political noise as the ruling African National Congress begins its week-long policy conference also put the brakes on the rand.

* “Above the 13.00 we initially saw local exporter interest which kept it capped but once the local market called it a day New York pushed the rand as high as 13.0850 in what looked like a typical New York short squeeze,” said Nedbank Capital analyst Reezwana Sumad.

* Stocks were set to open lower at 0700 GMT, with the JSE securities exchange’s Top-40 futures index down 0.42 percent. (Reporting by Mfuneko Toyana, editing by Ed Osmond)

Silicon Valley’s days leading the tech revolution may be coming to an end, according to one optimistic observer who believes the future of technology lies much further abroad than San Francisco.

The future of tech “will be written in Lagos, Nairobi, Kampala and cities across Africa,” Jeremy Johnson the CEO and founder of Andela told CNBC. “We believe that Africa is going to emerge as a very significant player in the global tech scene,” he said.

Andela connects Africa’s top 2 percent of developers with jobs at companies globally. “We created a platform that enables the best and brightest to basically scale their abilities as technologists, and in the process … also solve the problem that many companies around the world are facing, and that’s just a shortage of technical talent,” said Johnson

Read more: The future of tech is in ‘cities across Africa,’ says this start-up CEO

Buyout groups investing in Africa are turning east and shunning the oil-rich western part of the continent as they grapple with the effect of low commodity prices on private equity’s final frontier.

In the decade before oil prices plummeted, west Africa — particularly Nigeria — was the most attractive region on the continent for global private equity groups from Carlyle to Actis looking to tap the potential of the “emerging African consumer”.

But with Nigeria in economic recession for the first time since 1991, investors say they are looking elsewhere on the continent for deals in sectors from consumer goods to healthcare.

Kenya will convert its $243 million in loans to Kenya Airways into equity, the government has said, as part of a broader restructuring to nurse the ailing airline back to financial health.

The government owns a 29.8 percent stake while Air France KLM has a 26.73 percent stake in the airline, which slumped into the red five years ago following a downturn in tourism.

The airline has failed to record a pretax profit since then and the losses have compounded the huge debts the airline took on to buy a fleet of new Boeing planes, pushing it into negative equity territory.

The government has previously said it planned to convert its loans into equity but did not give an amount. The figure of $243 million was contained in a government paper submitted to parliament earlier this month seeking approval for the overall deal.

Kenya Airways warned in a statement on Thursday there was a risk of “significant” dilution of existing shareholders as it offers new equity in the restructuring exercise.

The airline has said the financial restructuring will help dig it out of its negative equity position and get a better balance between cash flow and debt repayments.

The restructuring is expected to reduce the airline’s debt to about $1.2 billion from above $2 billion, the government said in its submission to parliament.

The government is also seeking to guarantee $750 million worth of the company’s current debt with international and local lenders as part of the restructuring.

Some local creditors will convert some of their debt into equity too, a source at the airline said, without providing a figure of the amount.

The restructuring is conditional on all creditors and shareholders agreeing to it, the government said in the document submitted to parliament.

South Africa has fallen into recession for the first time in eight years after economic growth shrank by 0.7% between January and March.

The downturn, due to weak manufacturing and trade, follows a 0.3% fall in GDP in the final quarter last year.

It is the first time that economic has slowed for two consecutive quarters – the technical definition of a recession – since 2009.

The value of the rand fell by 1% on the currency markets.

Analysts had expected GDP to grow by 0.9% during the first quarter. However, Joe de Beer, deputy director general of Statistics South Africa, said: “We can now pronounce that the economy is in recession.”

Nigeria is rolling out its first national social-welfare program modeled partly on Brazil’s Bolsa Familia in a bid to boost a weak economy and curb poverty by giving cash to its poorest citizens and ensuring their children go to school.

The government of Africa’s most-populous nation is investing 500 billion naira ($1.5 billion) in the initiative this year and is talking to the World Bank about a $500 million loan, Minister of State for Budget and National Planning Zainab Ahmed said in an interview in the capital, Abuja. Launched in December, the program is initially targeting about 1 million households starting in eight of Nigeria’s 36 states. The government expects that reducing poverty will have a knock-on effect for the rest of the economy, she said.

The state will use biometric systems to register beneficiaries, and will make transfers into bank accounts that are opened for families’ caregivers, Ahmed said.

“Other administrations tried to do this before, but not with the kind of determination of Buhari’s administration,” Eigbe said by phone from the commercial capital, Lagos. “The enormous political will and a strong partner in the World Bank shows their determination to do it.” […]

By any measure it has been a bad few months for the South African economy. Confidence has plummeted since the contentious firing of former finance minister Pravin Gordhan in March, followed by sovereign downgrades to ‘junk’ status by S&P and Fitch in April. By early June it had entered recession.

Driving much of this is political instability, embodied by the scandal-ridden presidency of Jacob Zuma. Amid almost daily, high profile reports of infighting South Africa’s politics has become its greatest economic liability.

Yet rather than calming concerns its leaders seem intent on deepening anxiety about the country’s political future. Meddling in the economy, far from receding, is gathering steam.

The latest row is over the independence of the central bank, following reports that the government is seeking changes to its traditional role of focusing on currency stability towards promoting growth. The rumours have already prompted warnings of further downgrades into junk territory by S&P.

The news comes as the country’s Chamber of Mines is threatening to take the government to court over proposed changes in its vast mining sector. Fitch has warned they may deter much-needed investment.

Read more : South Africa is doing everything to avoid rebuilding confidence in its economy

East Africa is now more accessible than ever. After two years of construction, Kenya‘s largest infrastructure project since independence, a $3.8 billion Chinese-built high speed railway, is up and running.

It’s around 300 miles long, connecting the port city of Mombasa to the capital of Nairobi. Built by China Road and Bridge Corporation and 90 percent financed by China Eximbank, it is the largest infrastructure project since independence in 1963.

It’s named the Madaraka Express, after the day Kenya attained self rule. Speaking at its launch, Kenyan President Uhuru Kenyatta referenced the country’s colonial British railway — known as the “Lunatic Express” — built more than a century ago, saying: “Today 122 years later, despite again a lot of criticism, we now celebrate, not the Lunatic Express but the Madaraka Express, that will begin to reshape the story of Kenya for the next 100 years. I am proud to be associated with this day.”

Barclays has been given regulatory approval for the sale of its remaining stake in its Barclays Africa Group, according to a unit of the business.

ABSA Bank, based in Johannesburg, is the main business inside Barclays Africa Group.

Barclays chief executive Jes Staley said: “Regulatory approval for the separation of Barclays and Barclays Africa is an important step forward and allows us to move closer to our goal of reducing our shareholding in Barclays Africa to the point where we can achieve regulatory deconsolidation.

“It represents a key milestone in the execution of our strategy and the restructuring of Barclays.”

Barclays shares had risen as much as 2.5% in London on Wednesday, after Sky News reported Barclays was drawing up plans to reduce its shareholding in Barclays Africa Group Limited.

The bank has confirmed its target long-term shareholding in BAGL is around 15%.

A large minority chunk of the shares on offer – around 7% – will be acquired by South Africa’s Public Investment Corporation, the African continent’s biggest pension fund manager, according to insiders.

It is understood the share sale is being handled by investment bankers at Barclays, Citi and Deutsche Bank.

If successfully completed, the sale will go some distance towards Barclays’ eventual objective of reducing its stake in BAGL to below 20%, which will allow the London-based bank to deconsolidate the African business from its balance sheet.

A rebound in Kenyan banking stocks that’s driving most lenders to their first annual gain in three years is bypassing mortgage-provider HF Group Ltd. The company, which last month reported a 73 percent drop in first-quarter profit and had to borrow money to repay bonds, is the only one showing negative returns in 2017. HF’s woes show interest-rate caps imposed by the government late last year are spreading to the real-estate sector, while delays in being able to register properties also hurt sales, said Shaniza Kassam, a research analyst at ApexAfrica Capital Ltd. in Nairobi. 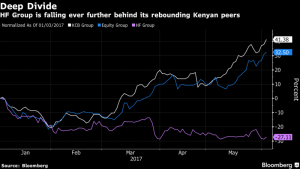