Well, public debt in African states is much higher if you take into account their revenue mobilization capacities. The bigger the informal sector, the lower the debt/revenues ratio.

Consider the case of Nigeria (from the FT):

Nigeria’s accumulated government debt is just 18.6 per cent of its annual economic output, one of the lowest levels in the world, implying that its debt burden is more than manageable. But is this a fair reflection of reality? 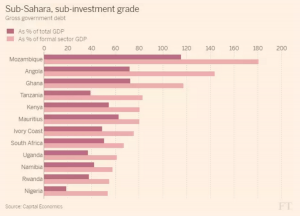 Using a different metric, the Nigerian government’s gross debt is 320 per cent of its annual revenues, according to figures from Fitch Ratings, one of the highest figures in the world and comfortably above the median of 196 per cent for countries in Africa and the Middle East that are rated by Fitch.

[via An Africanist Perspective]