The FT has a great special report on investing in Kenya. Highlights include pieces on devolution, President Uhuru Kenyatta’s “Big Four” legacy projects (including an ambitious plan to build 500,000 new homes), and the promises of the tech sector.

Meanwhile, nominal GDP growth is projected to remain respectable, despite sky-high corruption and generalized administrative failures in both the county-level and national governments. 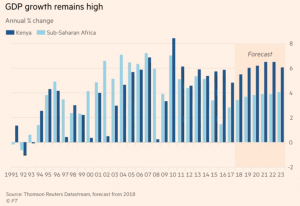 And here is an excerpt from one of the pieces: